FASD Network of Southern California educates, encourages, and supports people affected by fetal alcohol spectrum disorder. FASD — Fetal Alcohol Spectrum Disorder — is multi-layered and complex. Similar to autism in that it is neither visibly recognizable nor easily diagnosed, it affects a variety of behaviorial and processing aspects. FASD is less known and a less popular "cause" than autism, but the Network aims to change that with its professional look and feel.

With the goal of being THE hub for FASD information, community, and resources, the organization needed to increase its visibility and value.

The organization didn’t have branding assets when it approached Alvalyn Creative, but had a sizable and complicated Google sites presence.

Create an appealing identity system to increase value and awareness.

Create a friendly, non-clinical website to act as both communication hub and online resource for people in and around the FASD community.
The question for the website was how to sort and order the massive quantities of information and resources into an uncomplicated hierarchy for easy search, and also provide a pleasing and easy user experience.
And finally, the look and feel had to be Southern California through and through: sunny, casual, warm.

After conducting an initial assessment and brand audit to address needs, current situation, and opportunities not yet realized, I developed a brand strategy for the client to form a bridge from their current situation to what they wanted to accomplish.

In addition to creating awareness among families, adoptive parents, the courts, law enforcement, social services, teachers and educators, the org wanted to provide an online information and connection hub with categorized articles, events calendar, donations, and a conversion funnel.

Once the strategy was completed, I undertook the task of developing a simple and effective logo that represented the org and the disorder, and then created the website and identity system.

In my initial research and inquiry into FASD, organizations and resources, I did not find many well-designed, thoughtful logos. Most are of a clip-art and include tragic typography, cliché wine glasses and infants. Balance, precision, proportion are generally not considered. Ugh!
Since FASD is not curable and a life-long reality for those affected, my first goal was to create an adult logo and avoid all clichés. I decided on a typographic word mark rather than an icon-based logo to bring more awareness to the disorder — FASD — itself. My design is subtle, sophisticated, while at the same time, obvious. It stands out from what’s used by similar organizations.
I created the identity by considering the hidden issues of the disorder, the many variations of its manifestation in individuals.
To represent the SoCal vibe and reduce a sense of clinical, I selected warm colors from across the hue spectrum and hid a reverse impression of the uppercase letters within the letters. My intent was to create an honest visual identity that communicated hope but also the substance and seriousness of the disorder.
In addition to creating a  number of touch points, I developed a custom website which functions as a resource hub for those affected, their families, educators, law enforcement, the medical community, and also is the first point of connection to the organization and everything it offers. 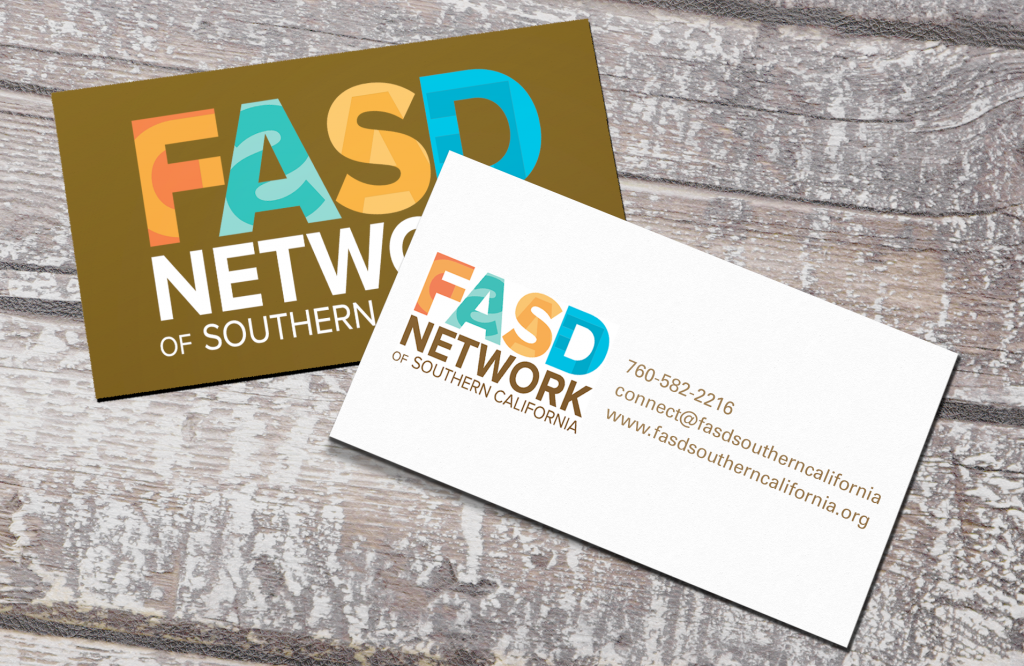 A ground up strategic brand that includes logo, identity system, and website — and provides practical, proven tips, resources, information and education for everyone concerned with Fetal Alcohol Spectrum Disorder.

The organization continues to increase in awareness, community, participation, training opportunities, and revenue.

Are you ready to get started on your brand development?